this post was previously published on my old website, there’ll be a few of those older but useful posts that I’ll be migrating over in the next little while…

Molecules are beautiful things, intricate and infinitely variable. As part of research publications it can be useful to catch them from their best angles. This short post gives some tips on how to present molecules in publications.

Our model for today is Prostaglandin-F2&#945

There are a number of chemical databases and ways of expressing molecular identities. A Wikipedia search is not a bad place to start. If you look to the right of the page, you’ll see a number of “Identifiers” in chemical databases listed. PubChem, a public database run by the NIH lists Prostaglandin-F2&#945 and shows an image. It also gives a chemical code, or isomeric SMILES code: CCCCC[C@@H](/C=C/[C@H]1[C@@H](C[C@@H]([C@@H]1C/C=C\CCCC(=O)O)O)O)O

Now we can take this code and do something really interesting with it. Download and run a program called Jmol. It’s a Java program which is open source and cross platform. Once open, go to the File menu and click on “Get MOL”, then paste the SMILES code in and… 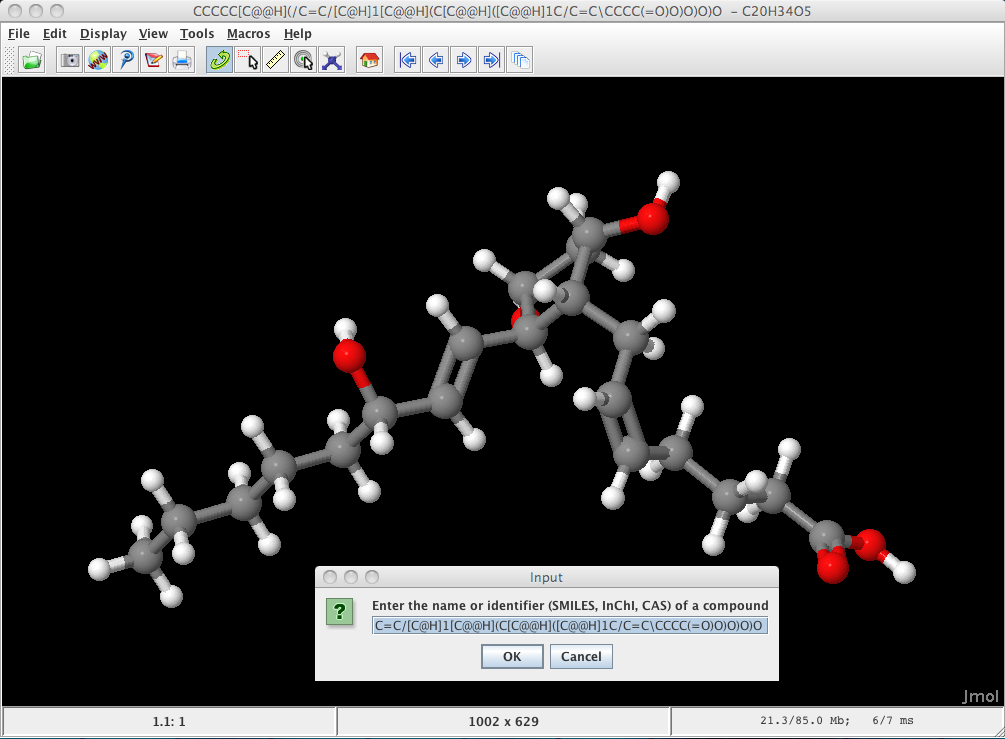 You’ll now see a great 3D rendering of your molecule. You can rotate it at will, as well as changing colours, the size of molecules and other settings.
Jmol also loads much larger molecules and protein sequences. This is where the Protein Data Bank comes in useful. Look up your protein, for example BDNF and you’ll notice a four character descriptor, in this case: 1B8M as well as an option to save a .pdb file. Either of these options can be used to visualize the protein in Jmol (either >>File>>Get PDB, or >>File>>Open respectively). 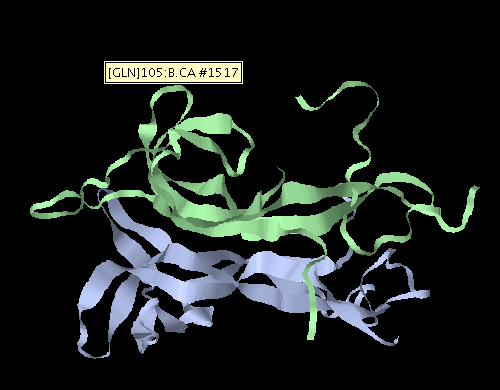 This image was viewed with the following options (right click to bring them up):

Jmol is a powerful piece of software with it’s own scripting capabilities. This makes standardizing your images easy.

It also allows making animations and all sorts of other things. For example, the animation for the Prostaglandin-F2&#945 molecule above was created using the following script:

These images can then be combined using another open source java program called imageJ. Just import image sequence, then save as animgif.

Another useful bit of scripting for Jmol, is saving off with transparency, this allows adding images to composite documents more easily. Try this from the console:

Musings on Research, Tech and Medicine
Dr Giorlando is a clinician-scientist with interests in neuroscience, psychophysics, addiction and temporal perception. He implements high-performance computing and electronic systems for research and enjoys hacking with digital media and sustainable technologies.

Jul 7, 2020
Document editing and report creation are key parts of any researcher’s workflow. Thankfully, the tools to edit research documents have improved greatly over the last few years. While I used to write most documents with $ \LaTeX $, I’d now recommend that researchers use R Markdown. R Markdown allows the use of R code in a Markdown format and is also easily extended with features. For example, there is the excellent bookdown package which allows easy use of book formatting, bibliographies and cross-references with Markdown.

Oct 10, 2019
Introduction Setting up wireless networking can be a frustrating experience. Available commercial routers vary greatly in their implementation and standards compliance, meaning that compatability between brands of router can be problematic. There are also significant security issues in implementing WiFi netowrks, compounded by the fact that manufacturers rarely update their firmwares and dump support for routers after only a few updates. Thankfully, there are now some great options for installing open-source software on routers so that it’s easier to have cross-compatibility and maintain up-to-date security patches.

Aug 8, 2019
this post was previously published on my old website, there’ll be a few of those older but useful posts that I’ll be migrating over in the next little while… Molecules are beautiful things, intricate and infinitely variable. As part of research publications it can be useful to catch them from their best angles. This short post gives some tips on how to present molecules in publications. Our model for today is Prostaglandin-F2&#945 There are a number of chemical databases and ways of expressing molecular identities.

Dec 12, 2018
Scientific computing increasingly involves handling large amounts of raw data. This is particularly the case for neuroimaging. With increases in processing speed outpacing storage speed, disk i/o has become a limiting factor in many computing applications, especially in multi-user systems. For my consulting work with GreenAnt Networks, I was asked to build a high-speed disk array for scientific computing and virtual machine storage. This is a brief build log and performance test of the outcome.

Jul 7, 2018
Introduction Scientific publishing is undergoing a transition from corporate-controlled, for-profit publishing to more open models. While “Open-Access”, is part of this, there are a number of considerations important in true “Open Publishing”: Free access to the public (who pays for most of the research via their taxes!) Free submission of articles by authors Open Data - where original data and analysis workflows are made public Creative Commons - otherwise known as Copyleft, where rights are retained by the author but the content is usable with attribution Transparency of the review process (with or without anonymity) Open software, standards and tools used in the publication process This post will focus on item (6) from above.

Jul 7, 2018
Sharing MRI data with colleagues can be a time-consuming exercise. The files are often large and data-sets need to be viewable in a flexible fashion. Rich features assist the communication of results, including: 3D viewing flexible slicing overlay of specific volumes While there are many software packages for running on the desktop, there’s nothing better than being able to point to a simple HTML link and open the scan data in a prepared format.

Feb 2, 2018
LaTeX is a fantastic way to create and display print-ready scientific documents. There are a number of different ways to edit and produce LaTeX documents, which we’ll revist in a future post. In this post, I want to deal with one of the major issues that people find difficult with LaTeX: tables. LaTeX can certainly produce any type of table you’d like to create, but it does so in a way that can be very difficult to follow visually.

Nov 11, 2017
In the process of building a new personal website, I hunted around for static website engines. My previous website used an engine called habari, but development of the Habari Project is discontinued and I was interested in writing posts in markdown instead of plain HTML. So let’s get a few questions answered immediately: Why a static engine? What is markdown? A static website engine converts an intermediate syntax into HTML.

Oct 10, 2017
If you’ve ever noticed the 3D images of brain structures on Wikipedia, you may have been curious where they are sourced from. It turns out that they are generated from a freely accessible Japanese database, the Life Sciences Database Archive. This database is licensed under Creative Commons. It includes anatomical models that can be downloaded as well as other public databases including gene expression databases. The anatomical models can be downloaded and browsed online at the Body Parts 3D site.